180*80 meters shocking water screen projection effect, 48 top projectors. The projection video fully integrates the coastal characteristics of Haicang Lake, with fountains as the mainstay, water curtains and fireworks in conjunction with performances, clever use of the most advanced international high-tech methods, combined with dance, music and other art forms to bring the audience a spectacular Beautiful sea night banquet. The "dancing robot" has a total weight of over 100 tons and an extension height of over 13 meters, just like a Transformers Hornet on the stage. Equipped with the only domestic DAFENG STACON system independently developed by Dafeng, using the SIL3 standard DAFENG STACON system, based on the artificial intelligence original bionic control system, it creates a multi-axis linkage robot technology with 4 manipulators, and drives 54-axis operation space through 3D animation simulation Control the curve and present the "what you see is what you get" effect in real time.

This behemoth moves flexibly and has complete safety protection and emergency measures. It is a perfect combination of AI and art. 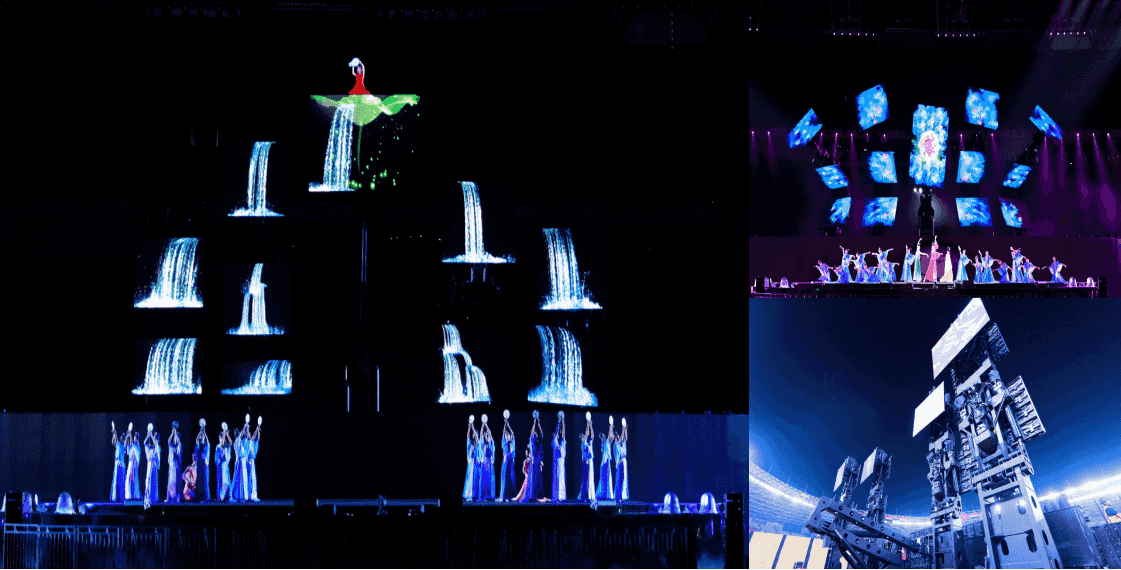 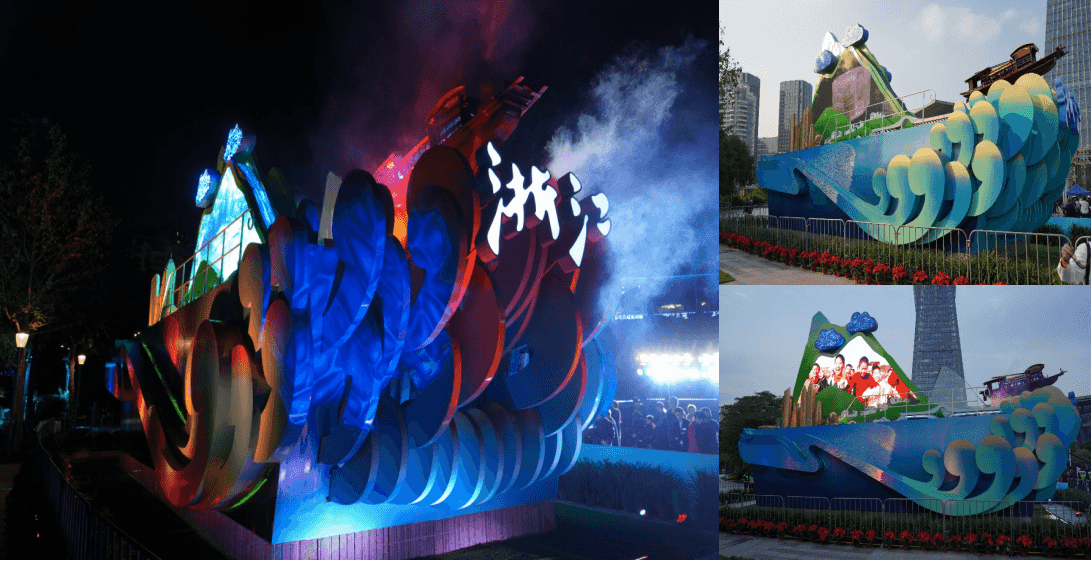 Awards: This project won the first prize of the Lighting Engineering Design Award in the 14th China Lighting Awards. 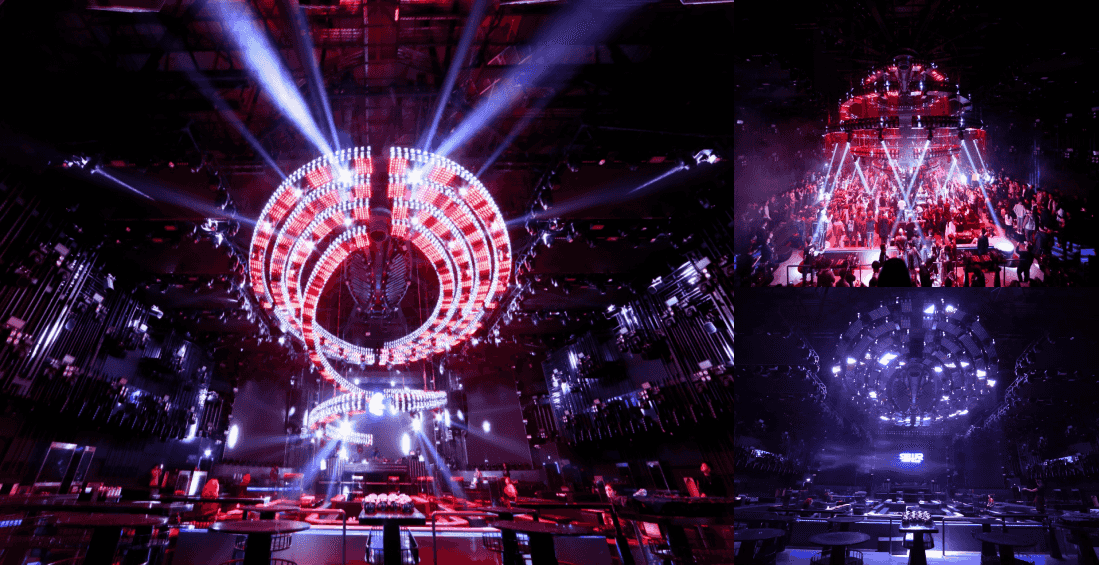 Taking the Taizhou Salt Tax Museum as the carrier, using advanced naked-eye 3D techniques, the organic combination of Taizhou's history, culture, folklore, landscape and artistic elements, presents the ancient charm of Taizhou, and brings the audience a magnificent and panoramic audio-visual experience. It has become a new business card for night travel with humanistic characteristics in Taizhou.

Awards: This project won the third prize of the Lighting Engineering Design Award in the 14th China Lighting Awards.

Build a new imaging carrier by technical means, restore the gate tower of the city wall, construct and create on the overall structure, maximize the advantages and characteristics of the projection show, and look up to the ancient capitals of the six dynasties through the four chapters of change, impression, style, and flow. Peerless elegance is an excellent project that fully demonstrates the charm of the city. 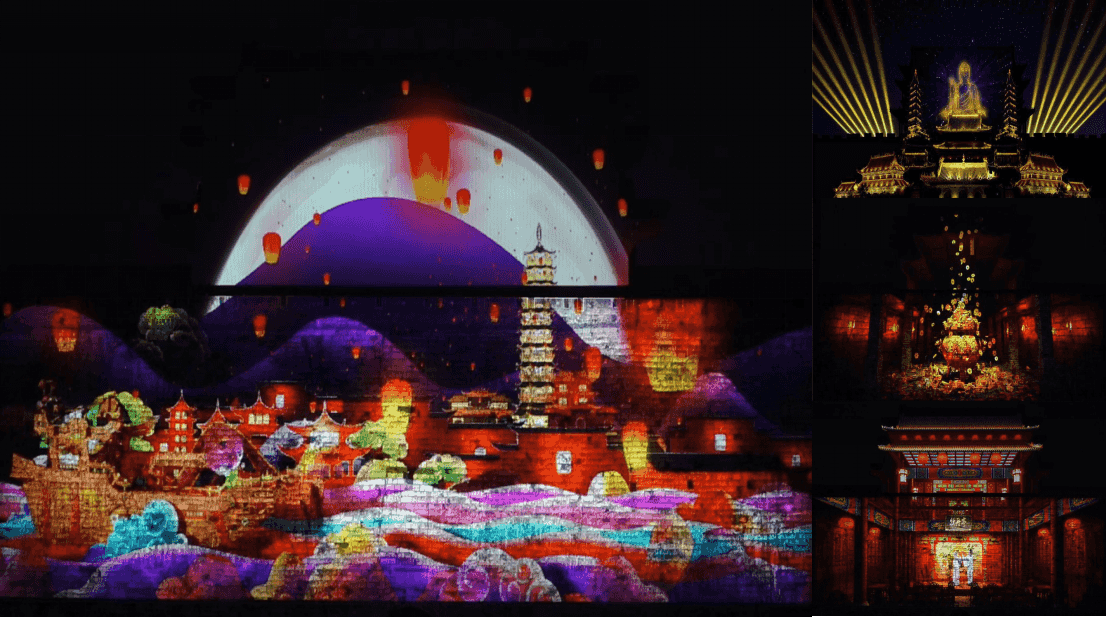 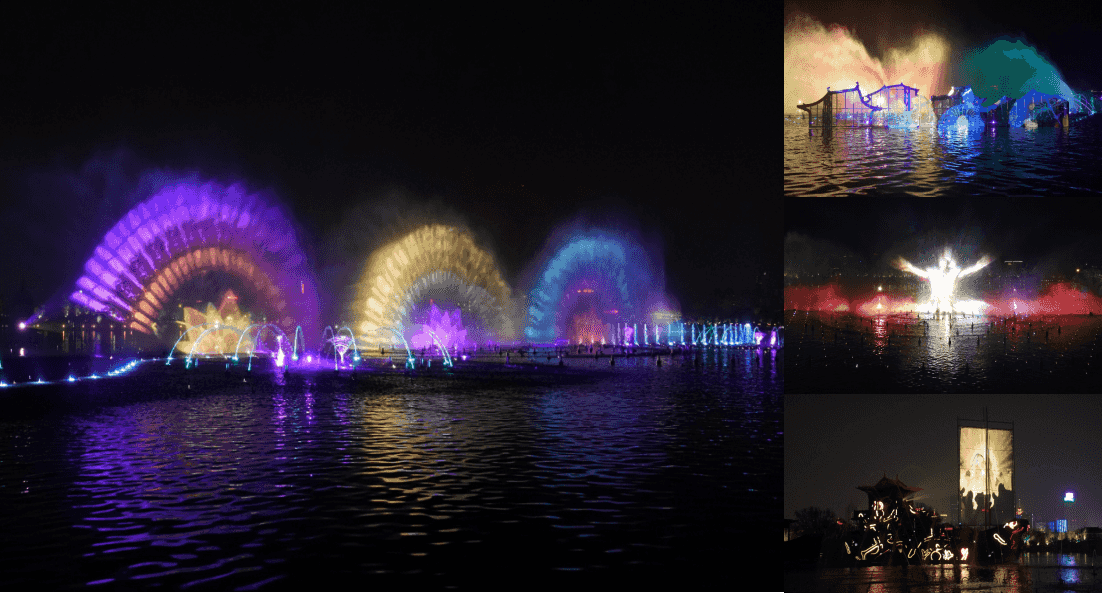 Dafeng’s ingenious work——The core landscape sculpture "Ning Hua Yi Liao" is full of modern aesthetic tension as a whole. It interprets the Zen artistic conception through opening and closing, rotating and other forms, combined with the Zen garden landscape around the square to construct a modern aesthetic Perfect fusion with Zen artistic conception. 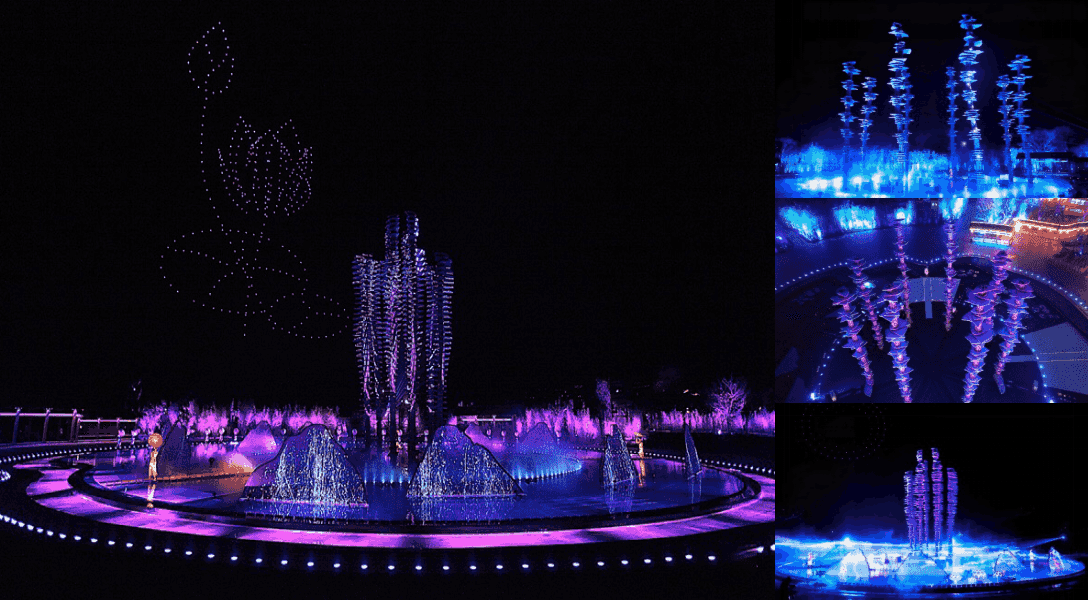 Transcending the tradition, fully upgraded, the world's only 360° rotatable water lotus theater, indoor and outdoor multi-dimensional performance space, reproduces the legendary life of the six ancestor Huineng enlightened and promulgated, allowing the audience to feel Zen between sitting and standing The beauty and interest. 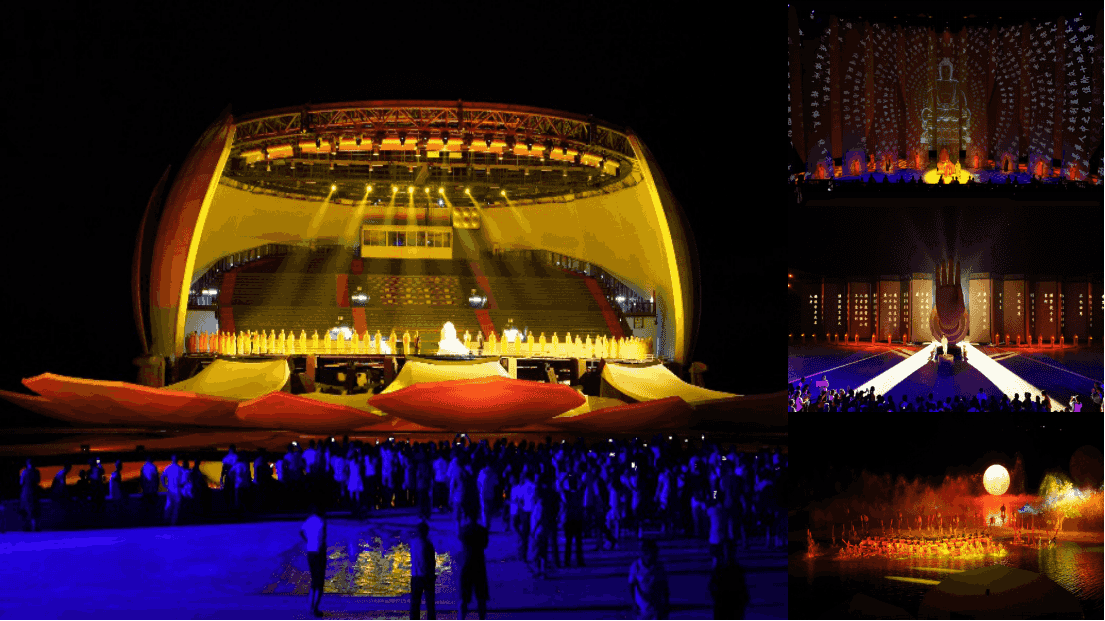 Large-scale epic naked-eye 3D cliff light and shadow show: The "Qinling Epic" on the cliff stretches for thousands of miles, up and down for thousands of years. It tells the great changes of the Qinling land from ancient myths and legends to vicissitudes of life, and then to the shining light of civilization;

Tunnel immersive driving light and shadow show: Take the time-space train, travel through the three major time-spaces-the vast starry sky, magnificent mountains and rivers and human civilization, trace back the light and the flow, and find the dream of Qinling;

Artistic lighting: Suspension bridges, plank roads, and squares are colorful, complement each other and light up the world's most blessed place. 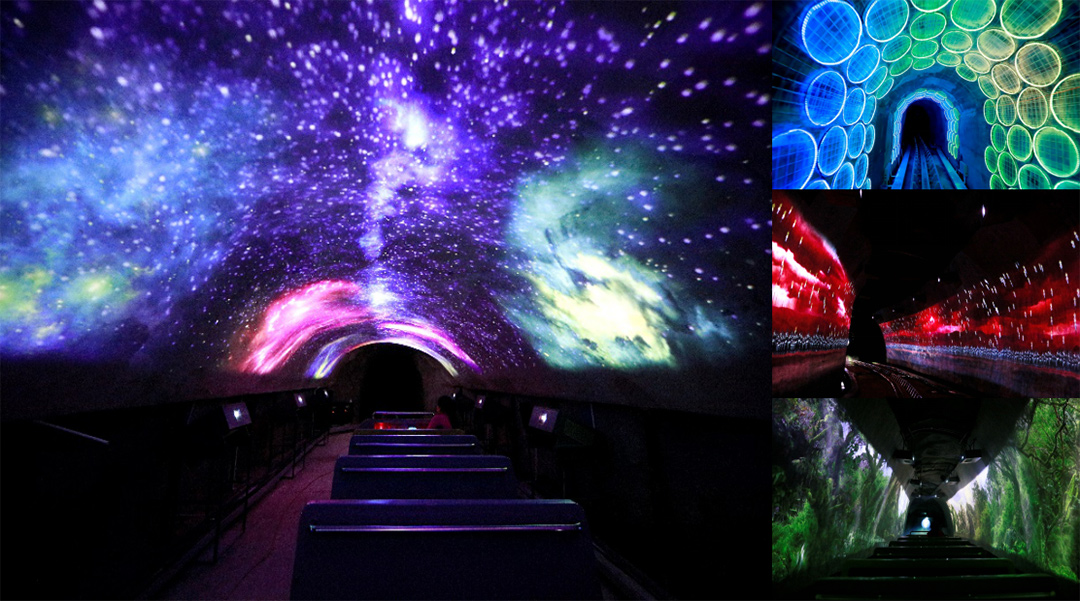 With the "Shuanglong Shouyuhuang" platform as the main performance area, wonderful pictures are presented on the dragon-shaped skeleton water curtain,

The vivid ancient myths and legends of Hancheng, famous historical figures and deeds, and magnificent humanities and natural landscapes are vividly expressed, creating a dreamlike artistic conception and breathtaking effects. It shows the history of a generation of great man Mao Zedong walking out of Shaoshan, embarking on the road of national salvation, unifying the divided old China into the new China, and magnificently restoring the brilliance of the great man. 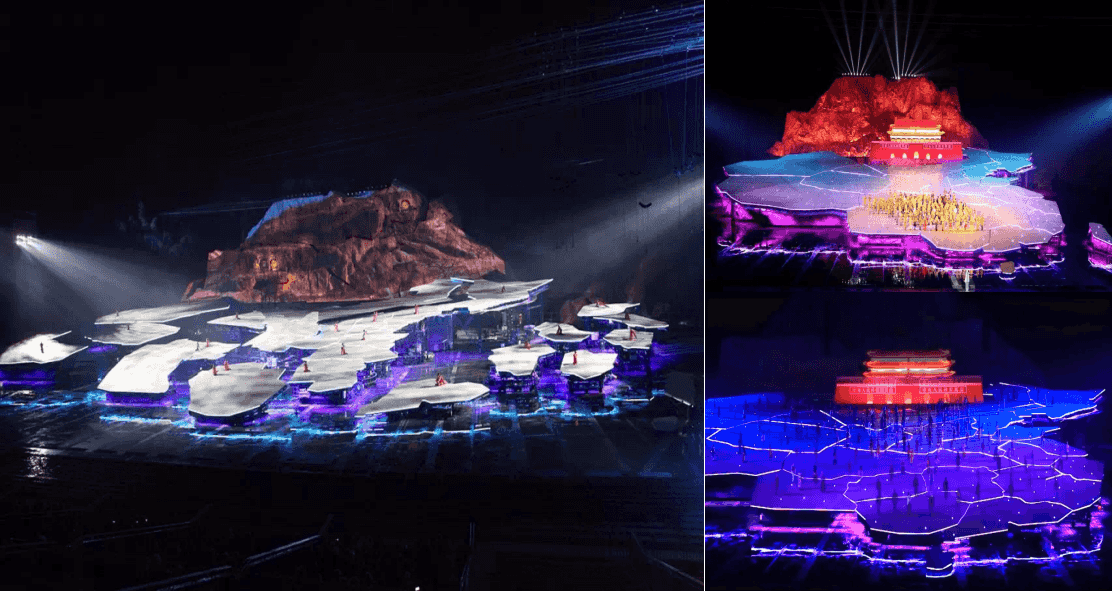 At night, you will be transformed into a bright and beautiful "dancer", staged a dynamic 3D projection show, telling the past and present of Hong Yuan;

In the viewing area, the outdoor three-proof interactive touch all-in-one machine has 500 ancient poems for answering, and it can also form an interactive effect with Yunmengshu, which is full of fun.

With the theme of "Millennium Wuyue·Dream of Lin'an", using the golden sun and silver moon bridges as the carrier, using advanced technologies such as 3D visual effects to tell the charm and modern glory of Wuyue;

The past and the present are connected by the gorgeous water shows of Lintian Bridge, forming an overall pattern of "two shows and one curtain", which together weave the time and space story of Lin'an, create brand-new wisdom light and shadow, outline the new axis of the city, and reshape the Lin'an meeting room. 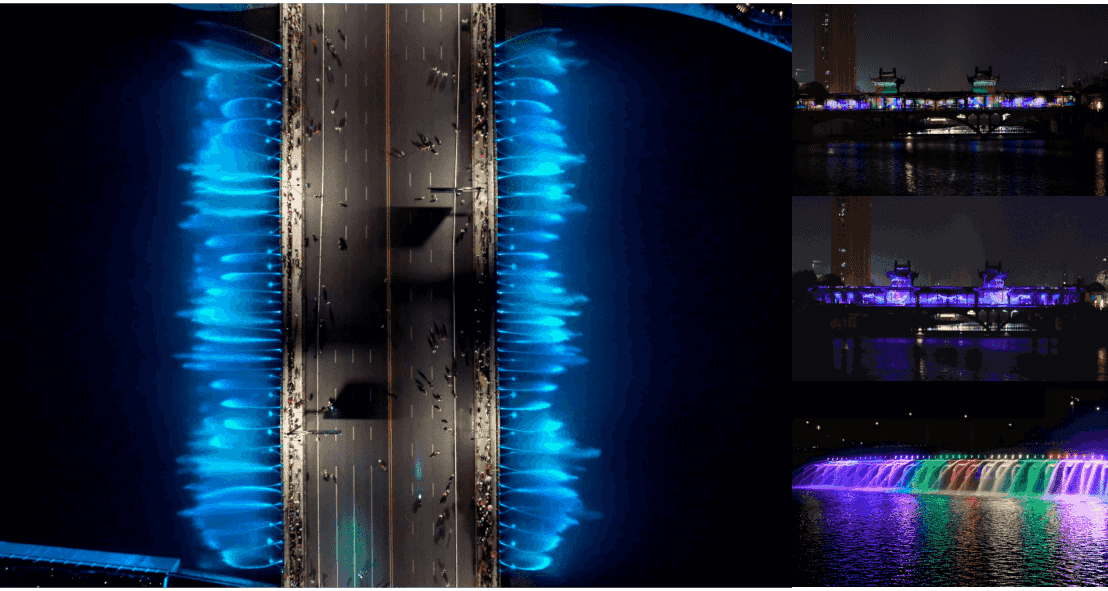 Anshun, Guizhou, "The Book of the Night · The Destiny of This Life"—the first large-scale interactive experience show of light and shadow installations in China

"Ye Shu Jin Sheng Yuan", the country's first immersive large-scale interactive experience show of light and shadow installations, Anshun's explosive cultural tourism IP, located in the ancient town of Jiuzhou Shanli Jiangnan Scenic Area. Relying on the three unique local cultural elements of Tunpu, Di Opera, and Flower Sea, using light and shadow as pen and ink, revitalize the story IP of "Jinshengyuan", telling tourists a story of love between the general of the Ming Dynasty Muying and the flower god of Adabao that has passed through thousands of years Pocahontas. Dozens of interactive experience devices such as machinery, waterscapes, and images that are closely related to the content, combined with beautiful and gorgeous music and sound effects, are integrated into the moving real-world interpretation of the eight major areas, running through the complete story axis, and opening an unprecedented immersive night for tourists Tour trip. 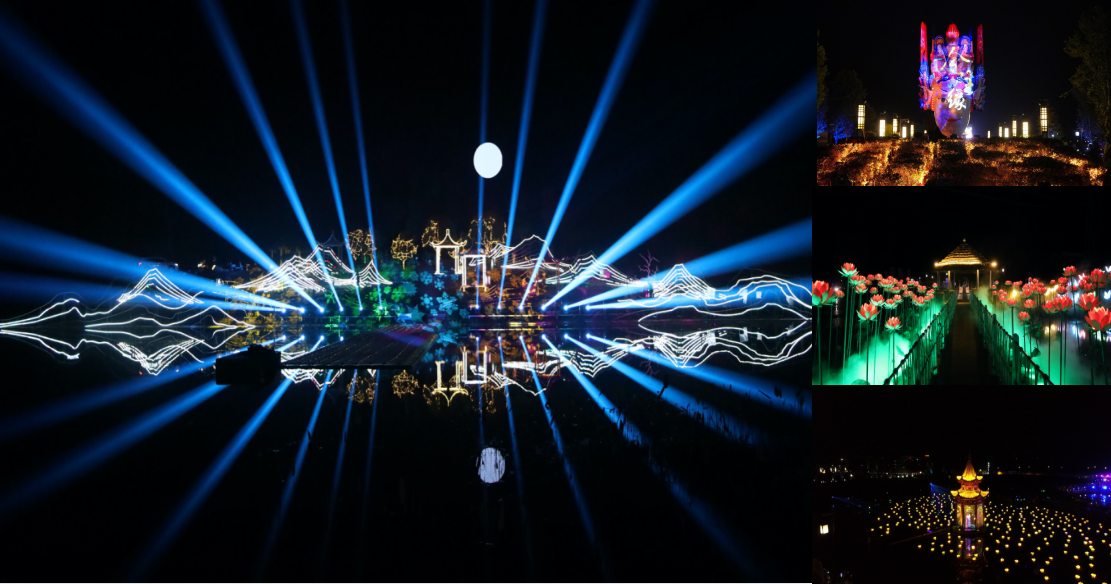